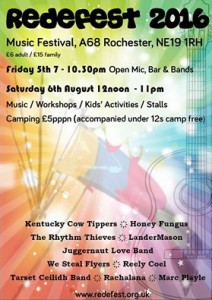 The Rhythm Thieves are really looking forward to playing at the 10th anniversary Redefest in Northumberland on 6th August 2016. We’ve had great times at this lovely community festival in the beautiful Northumberland moors over the years and we are hoping that the rains keep away and the sun comes out for this celebratory event! If you can’t wait till Saturday for your music and beer fix, then come along to the open mic, bar and bands on Friday night.

The Rhythm Thieves have started hosting a ‘band’ open mic at the Sun Inn, Leintwardine. The evening has been set up to allow bands to come and play a short set, either with or without members of the Rhythm Thieves standing in where needed! Expect to see 3-4 bands in an evening at this great music venue. If you play in a band and fancy a slot please contact the Rhythm Thieves in the traditional way, or via Facebook. 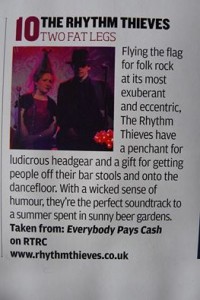 The Rhythm Thieves were chosen from amongst thousands of national and international acts to be featured in Prog magazine, the world’s leading progressive music mag. The band’s song ‘Two Fat Legs’, a twisted progressive-disco-folk sea shanty inspired by ‘Hearts of Darkness’ author Joseph Conrad, was on the cover CD of the August 2013 edition.

Click here to have a listen to the track that was chosen.