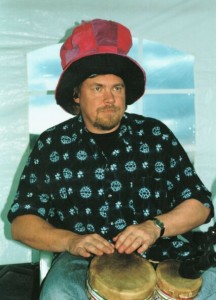 Equally at home with drums, congas or Venezuelan knee-cymbals (“I just hit ’em”), Rob tickles the skins with an atomic-clock accuracy you could measure a hummingbird’s hiccups by. In his own words, “I’ll set the speed – you follow!”

Why did you start playing your instrument?
Because it was getting expensive having to replace my Mum’s cushions and knitting needles. It was something that I always knew I would end up doing. I can’t remember not hitting things!

What was the first music that influenced you?
A mixture of Tamla Motown and progressive rock. I had two older sisters, one liked one, one liked the other and both played them at the same time!

How did you get involved in the band?
I started by putting an advert in a music shop for Folk musicians knowing I wanted to form a rock band! I knew that if I asked for rock musicians I would end up with a bunch of tossers who would just want to solo over everything.

Why do you do it?
Because I can’t do anything else!

What is your inside leg measurement?
32 inches which is really bizarre because the outside is 72!

What has been your favourite moment so far?
When we wrote our first song and I knew it was going to be OK.

Where do you think the RT fit in with the current music scene?
It doesnt and I think that is a good and healthy thing, if somewhat lonely.

What is the capital of Chile?
C

What is the title of the third album and when is it going to be released?
“The Difficult Third Album”. October 2005 (ha ha ha bloody ha).

Where would you like the band to be going in the future?
Festivals, bigger and better venues, Birkenhead.