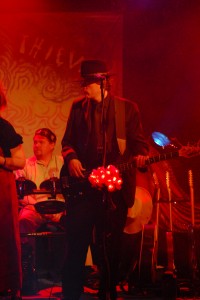 More acidic than a bucket-load of lemons, more flirty than a hen-night in Blackpool, and more sober than a coach-load of Methodist judges on a mid-afternoon tour of Norfolk Broads tea-rooms, Phil walks the sensible / outrageous see-saw with aplomb.

Desperate, manic, garrulous, gregarious and of gargantuan ego, his driving, no-nonsense bass-lines are the very heartbeat of the band. Since ole Johnny Cash’s sad and untimely demise, Phil is the unrivalled “Man In Black”.

Why did you start playing your instrument?
I was 14 and I started to worry that if I didn’t find something else to do with my hands I would go blind.

What was the first music that influenced you?
The beautiful melodies of Francesco Tarrega – he writes a good tune. Although I wanted my classical guitar to sound like Jimmy Page!

How did you get involved in the band?
The RT’s were looking for a charismatic, good-looking and sensual bass player with an ego to match that of Mark’s – I was the obvious choice.

Why do you do it?
A love of sex, tea and a strange blend of mad old folkies who needed strong rhythmic assistance on one string at a time.

What is your inside leg measurement?
32 inches, or if the Netherlands 8 1/4 inches

What has been your favourite moment so far?
The dream I had where Jill backed the van over the banjo!

Where do you think the RT fit in with the current music scene?
It fits into all the venues no one else wants to play. Some bands are all things to all people – we are some things to a few people – but we love both of them very dearly.

What is the capital of Chile?
Santiago.

What is the title of the third album and when is it going to be released?
“The Blood of Bertie Bassett”. It will be released under a different title in 2006 – although Mark will start in December 2004 from tracks featuring him that he has already recorded.

Where would you like the band to be going in the future?
Our first European tour in 2005 will feature venues from across Hereford and Shropshire often involving 2CV’s and a Citroen H van providing the European essence.