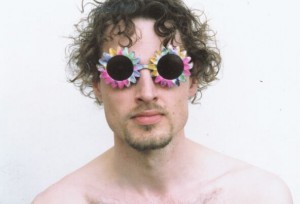 The aloof, “mad, bad and dangerous to know” love interest of the band; this musketeer-shirted, curly-haired chemist from Cannock would probably also be your Sunshine Lady from L.A. if you caught him in the right mood.

In his own words, “My ideal would be for me to play the rhythm, lead and bass in everything… plus maybe the drums”.

Why did you start playing your instrument?
I was sixteen and spotty and I needed something to fiddle with.

What was the first music that influenced you?
“Gonna Make You A Star” by David Essex. I think that there is some cine-film of me miming to it from when I was about 3 years old.

How did you get involved in the band?
I started off on cannabis but then found I needed a bigger hit and I thought I could handle it and things just spiralled…

What is your inside leg measurement?
That’s between me and my tailor.

What has been your favourite moment so far?
Losing my virginity to a tribe of pygmies on the third African tour.

Where do you think the RT fit in with the current music scene?
About thirty years behind it.

What is the capital of Chile?
C.

What is the title of the third album and when is it going to be released?
“We, Her Majesty’s Subjects”, to commemorate the life and glorious reign of Queen Elizabeth II. We will release it in 2013 to coincide with the 60th anniversary of her coronation and it will star John as Queen Elizabeth, me as Lady Fatima Hogg-Sandwich, Jill as Tony Benn, Rob as the Pygmy Chief and Phil as the corgis.

Where would you like the band to be going in the future?
Touring a selection of our acoustic numbers backed by the London Symphony Orchestra.