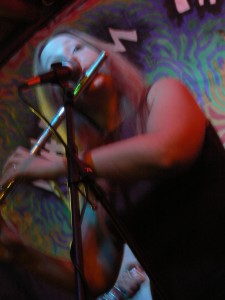 To misquote the late Sir Winston Churchill, “Never before, in the field of jiggy-folky-stuff, has so much been owed by so many Rhythm Thieves to so few Jills”.

‘Lady Pretty Elbows’, as she is known to her legions of devotees, takes the amorphous glob of putty that is the RT and, with a wave of her magic flute and a strange, whispered incantation, transforms the whole sorry shebang into a beautiful, shimmering butterfly – with a mandolin up its rear end (thanks John!).

Passionate, purple-nosed, probably pissed but immensely proud of her puppy, Jill could never be accused of mincing her words, although she minces her fellow band members all of the time. In her own words, “If my mum wouldn’t like it, we’re not doing it!” Annie, get your gun!

Why did you start playing your instrument?
I’ve always needed to fiddle with things, first it was the piano and then I wanted to play the oboe, but no-one taught that at school, so the flute it was.

What was the first music that influenced you?
Mum used to have this horrible wailing stuff on the radio. I hated it!

How did you get involved in the band?
John had seen that advert. There was no way he was doing something like that without me being involved!

Why do you do it?
I have absolutely no idea. The wages are crap, the equipment is heavy, the hours are long, the company is rubbish and I hate everybody.

What is your inside leg measurement?
I don’t know, does anybody else have any suggestions?

What has been your favourite moment so far?
Seeing everyone’s faces when I suggested doing a naked cover shot for the second album.

Where do you think the RT fit in with the current music scene?
Huh?

What is the capital of Chile?
Oh God, really, how ridiculous. Bilston of course!

What is the title of the third album and when is it going to be released?
“Jill and her Flute”. It will be a long and beautiful combination, concept album of Flute and Jill. It will be released as soon as I can persuade Mark to record me and my flute.

Where would you like the band to be going in the future?
Bigger, better, faster, harder.